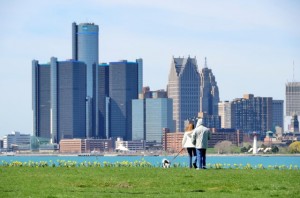 In a city with 80,000 empty homes and 100,000 vacant lots, dreams are starting to come true. With just $1000 to purchase, and about $30k for renovations, Antjuan Wyatt and his family are set to move into a home that would be the stuff of pure fantasy, for that price, in any other US city.

For years, Detroit has been circling the drain, economically, as factory after factory closed and the job market withered, forcing unemployed residents to relocate. Recently, the city has created some innovative programs to encourage new, and existing, residents to start revitalizing many once-desolate neighborhoods. Tax incentives, grants and other progressive programs are bringing about a sort of renaissance, allowing young people like Wyatt, 27, to put down roots and help bring Detroit back from the brink. With the pendulum having swung about as far to one side as could be imagine, many people, both in and out of Detroit, speculate that the city may become the next Austin or Portland, as young people, artists and entrepreneurs flood in to take advantage of the unbelievably affordable real estate.